Welcome to the third level of training in learning

“The Wisdom of the Chumpi”

These study classes in Module 3 will be focused on the preparation, connection, conduction, and conscious management of the Chumpi energies in the ritual application of the Chumpi Khuyas. 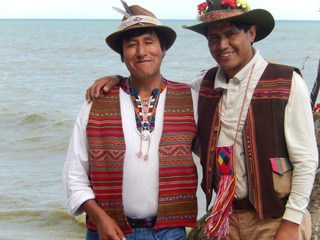 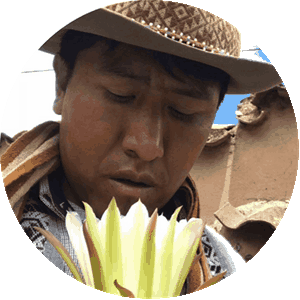 Many years ago, there were ancestral masters recognized as "Chumpiq"in the towns and nations of the great Tawantinsuyu, the chumpiqs sustained and maintained different levels and functions in this space of knowledge. Some were energetic healers of the physical body that utilized Chumpi khuyas. Some moved and wove the Chumpi energies in the dimension of Kay Pacha while others, in the different worlds and cosmic dimensional planes called Pachakuna, in which they called Chumpiy Pacha, the dimension of time and space of the chumpi energies in cosmic nature.

Some of the Chumpiqs wove, connected, and moved the Inti Chumpi Kallpa, or solar energies that surround the Teqsu Muyu Pacha (layer and energy field of the earth). These great masters left us their secrets so that we could have the opportunity to learn this wisdom from the Inka Chumpi Khuya.

In this series, you will focus on finding, recognizing, communicating, weaving, and managing the different levels of Chumpi energies. You will understand these energies in their different states, paths and manifestations. You will begin to learn and work with the mysteries and secrets of connection and channeling of their energies of each Chumpi Khuya, according to the ancestral Inka tradition.

You will learn and be able to use a series of techniques and rituals with the Chumpi Khuyas and Chumpi Khuya khipu. You will begin to master the management of Chumpi energies, operation, and movement of the Chumpi Khuyas, the correct forms of application in Chumpi Pacha and the Manqos Wasi of the body. 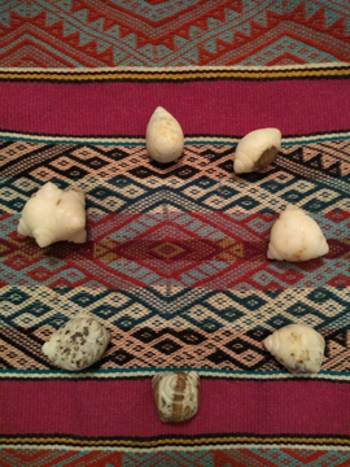 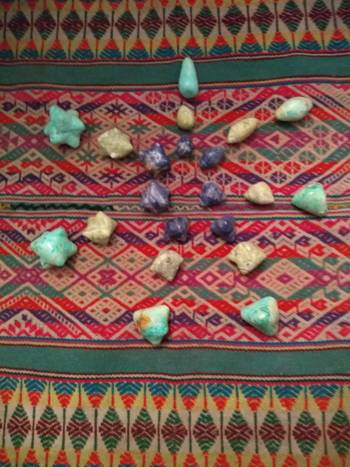 Origin of the Chumpi Khuya Mesa

The Chumpi Khuya Khipu currently known as Chumpi Mesa, comes from our pre Inkas and Inkas ancestors, the healing teachers and teachers known as MesaYuqkuna (carriers of Khuya tables) and Hampiqkuna (energy healers), who used to practice energy and spiritual healing of the diseased bodies. The Chumpis were also used as a form of protection, management and energy connection with specific energy points and spaces.

For many generations this art and knowledge about the Chumpi Khuyas has been reserved and protected by the descendants of the lineage of the Khuya Tables (bearers and guardians of the tables).

Thanks to these guardians of knowledge now manifesting again in these times. It is foretold in the prophecy of Pachakutiy this time period or Pacha that we are currently living in signifies the return and cosmic rearrangement in the Kay Pacha (space we currently line in). This seed of knowledge known as the Chumpi Khuya has returned for the restoration, healing and channeling of energy in physical and other bodies.

The Chumpi Khuya Khipu is a very special and sacred package or bundle wrapped in tradition. Inside it houses magic and mysteries of the Chumpi Kallpa, which are beneficial to heal the energetic body of being. This mesa which is composed of stones and other sacred materials are designed with specific shapes and codes to guide, channel and transform energy. The energy points or eyes of the body, which we call Ñawin and P'oqpo operate at their different levels and states in the body.

It is important to know that Chumpi Khuyas have different levels, connections and functions, made of different types of stones and minerals from the earth. Some come naturally, produced by nature.

Other Chumpis come from another dimension that we call Pacha and are connected with cosmic beings, while other Chumpi Khuyas are made by the hand of man today, which are replicas of the original Chumpis.

The man-made Chumpis need a ceremony to enable and activate their energies. For this reason the Chumpi Khuyas energy manifests and is transmitted to the bearer according to their level of connection, their essence and the level and energy of the corresponding Chumpi Khuya.

The Chumpi Khuyas have the function of protecting, blocking, moving, maintaining, channeling, opening and driving the various energies of the body. 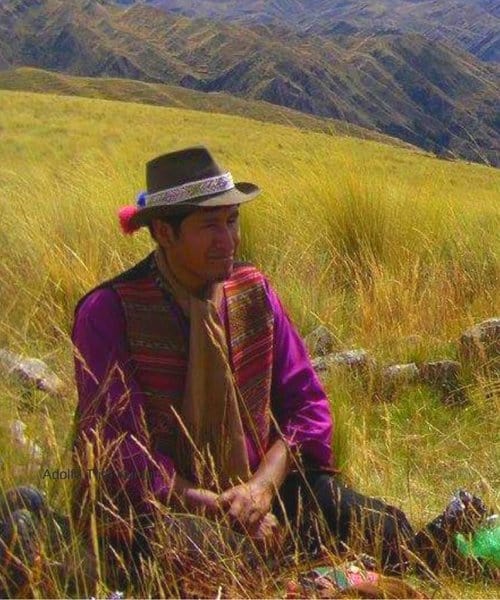 Tupaq (Adolfo) Ttito Kuntur was born in Poma Canchi, Peru, a small agrarian village surrounded by mountains and lagoons at 12,000 ft. He is the oldest of 6 children born to parents from a lineage of Inkas and medicine people. His journey in the Andean medicine ways began as a child under the guidance of his grandfather and parents who worked with plant medicines as Pampamisayoqs.

Tupaq experienced many of the classic initiations for becoming a medicine person. He has been struck by lightning twice (as a child and an adult). During adolescence he momentarily died from disease but was resuscitated by the Apus (mountain spirits). At age 16 Tupaq lost his father, and in addition to taking over helping his mother raise his siblings, the spirits of the mountains began their teachings to Tupaq directly.

After years of personal tests and training the Apus gave him the power of an Altomisayoq. With the guidance of their knowledge and practices Tupaq’s gifts come from a pure communion with the Apus for over 20 years. He has now begun to teach the cosmology he learned from the Apus and Pachamamas of sacred places in the land. 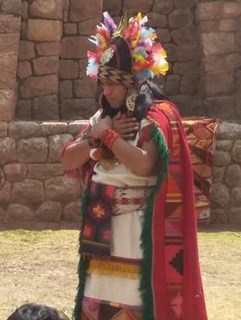 T’ito Q’osnipa Kuntur is a descendent of one of the oldest lineages know as the Solar Inkas. He is the Founder of the School of the Solar Inka and the founder of Yachay Wasi Inka, Tawantinsuyu. He is an expert and has an endless amount of knowledge in regard to the Inkan culture and Andean spirituality. He has taught internationally and finds great joy in teaching all that come with curiosity and an open heart. 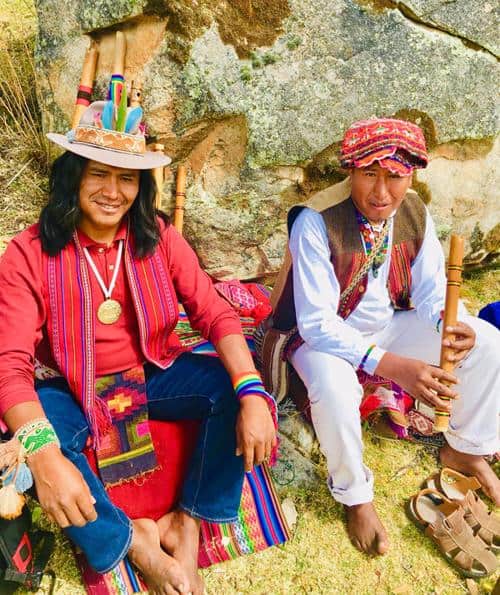 In this part of the study, you will learn the basic techniques of the Chumpi Khuyas. You will be able will apply fundamental exercises, practices, and rituals of Chumpiy that include techniques of conduction and management of Chumpi energies and energetic healing techniques that work in different spaces, bodies, and dimensions of the being.

The techniques and rituals will guide us into the mysterious world of the manifestations and actions of the Chumpi energies, so we can learn and understand the management and channeling of their healing forces.

This week’s study explores the correct actions and applications of the Chumpi Khuyas in which we will learn the order, period of time and sequence of their handling along with the physical and energetic application through the ancestral techniques of Chumpipay.

You will learn to connect and synchronize energy points, the reprogramming and repetition of energy patterns and forms, the reprogramming of your Chumpi energy codes for a better application and result in ritual arts and healing with the Chumpi Khuya.

In this session you will focus on recognizing and consciously accepting the chumpi energies through the Chumpi Khuya. The practice of Chumpikuy will guide you, teach you, and invite you to its dimension of Chumpi Pacha energies.

You will learn and be able to work with self-awakening and activation, self-generation, and self-creation of the Chumpi energy in the Manqos Wasi.

You will learn to be a dimension of time and space of Chumpi Pacha, for the movement, permanence, and operation of the Chumpi energies from this physical body. As you work with the ancestral techniques and practices, you will learn the application of the wrapping, weaving and protection of the body with the sacred forces of Chumpi,

You will learn about the natural energies, superior cosmic energies, beings and cosmic deities and spirits that connect and govern the Chumpi energies in the moment of the ritual operation of the Chumpiy.

You will begin to understand its connections, sources, states, and levels of energy. You will begin to know its functions and we will apply the ritual to achieve it by connecting, invoking, calling, attracting, and inviting the superior forces in the ceremonial act.

Class 8+: Topic of remaining classes to be announced

Dates will be announced during the program

The final topics and class dates will be announced during the program. There will be one or more additional classes according to the progression of the group.

This course is currently offered at a special introductory price.